Australia’s cheap energy is a thing of the past, why are we now insisting we must top the pricing, leader board?

The oft-cited perception that Australian electricity is cheap as chips is no longer true; charges are now 70% higher than America.  In addition, this disparity is only getting bigger with essential Network Upgrades and Carbon Taxes pushing Australia’s costs up by 16% again this year.

Australia has effectively limitless reserves of cheap coal (realistically thousands of years).  True, it’s a big country and the cost of transmission can thus be higher than most, but we’ve always prided ourselves on this abundant energy resource.  It is the foundation of our cheap electricity which powers our internationally competitive industry (inc. energy intensive ones such as aluminium smelting).  However, does the myth of our cheap energy, pot of gold still hold true?  Well, times have changed, that’s sadly now a thing of the past.

To demonstrate why prices are rising here, I’m going to summarise hopefully into a palatable form the results of two recent, extensive and well-respected reports: “Electricity Prices in Australia: An International Comparison” by Carbon + Energy Markets  (an energy consultancy) and “Changes in regulated electricity retail prices from 1 July 2012” by IPART (the NSW government regulator of electricity).

In particular, I think the financial impact of the Australian Carbon Tax, which began just 9 days ago, may be of universal interest to anyone who has either already been hit by it (E.U.), or are likely to soon (U.S., if Obama wins the next election)

What is the relative cost of energy in the OECD?

The Aussie dollar has gone from strength-to-strength since the GFC which, with a little help from China’s boom, we seemed to largely bypass.  This strength is reflected in the equally strong Aussie dollar.  So, if you consider this a blip and want long-term rates, we could used the 2007 rate of exchange as a faired benchmark.  Nevertheless, even using this conservative approach, household electricity prices in Australia in 2011/12 are still higher than those in the other major OECD countries (such as the E.U., U.S., Japan and Canada).

When comparing prices in 92 jurisdictions, be they countries or states within a federation, CME found Australia’s New South Wales ranked 4th only behind Denmark, Germany and South Australia.  Other Australian states fared hardly better; Victoria was 5th and Western Australia was 6th.  Far from being one of the cheapest countries in the world for electricity, as the urban legend goes, Australia is the 3rd most expensive and still racing up the ranks further.

Our Energy Minister, Martin Ferguson, said earlier this year that Australians pay less than the OECD average.  Did he now?  That seems contradictory.  That’s because he, perhaps unwittingly, relied on a document called Energy In Australia 2012, which his department’s Bureau of Resources and Energy Economics (BREE) published in Feb’ 2012.  The document, however, uses outdated electricity prices from 2009-10.  “That data is old,” the Energy Users Association of Australia executive director Roman Domanski told The Daily Telegraph on Mar 20th 2012.  Was it Happy Chance or deliberate cherry picking of data by Martin Ferguson to fit the required political message?

Using 2007 currency exchange rates (and further adjusting for Purchasing Power Parity), Australian households still paid more than those in Japan, US, Canada, and paid the average of the equally Carbon Tax-laden EU.  Electricity charges in Australia are now 70% higher than America and 130% higher than Canada.  That is not just small fry amounts. 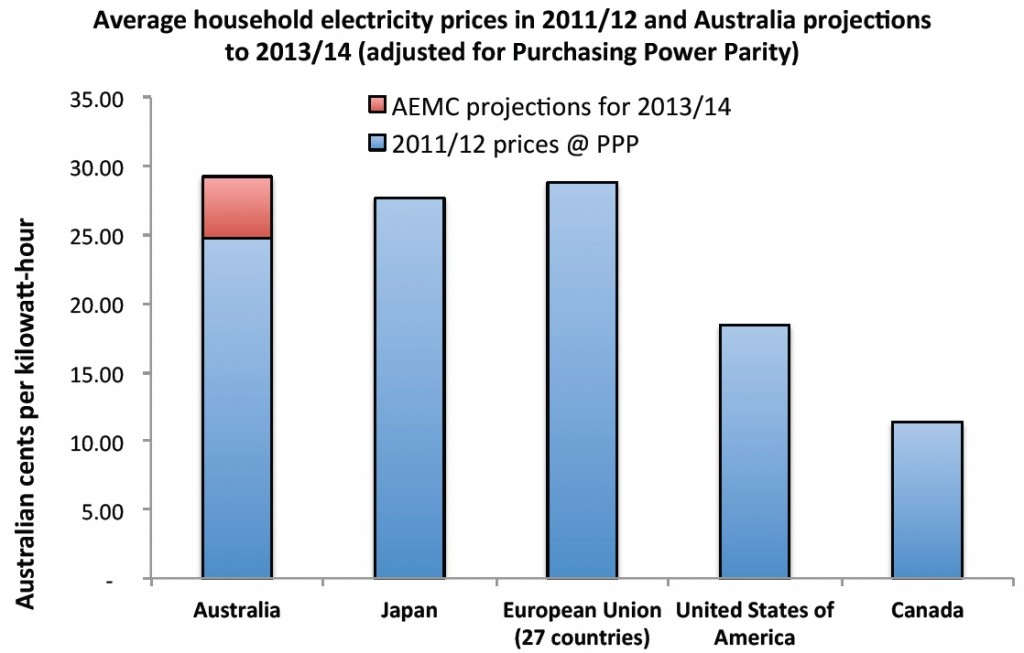 This large disparity is a significant extra cost on Australian home owners and businesses alike.  So, what’s causing it…

Why is the once cheap, energy price enjoyed by Australians sky-rocketing?

Another electricity price jump this year, but how much is “much”?

Over the past 2 years, the main reasons for the increases in average, regulated, electricity prices have been rising network costs (the costs of using the transmission and distribution networks to transport electricity to customers’ premises) and rising green scheme costs (the costs of complying with Government aimed at mitigating growth in carbon emissions).  Last year’s 17% home owner, price jump was compounded with this year’s 16%: 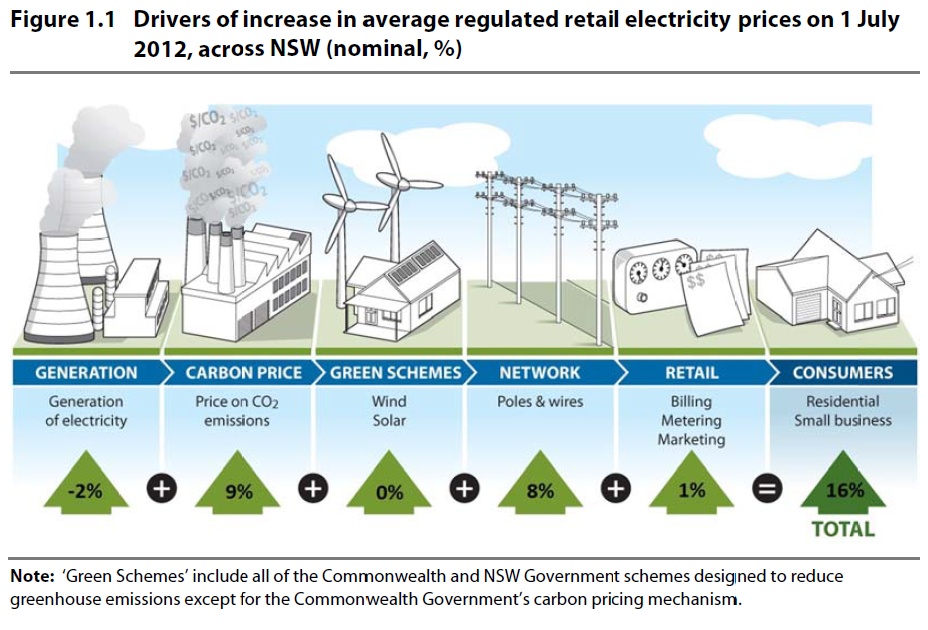 Unbeknownst by many, the Network Costs that are being passed onto us end-users are unavoidable.  There is no need for a fall guy on this issue.  Maintenance of the “poles and wires” has been neglected for decades; no one state premier wanted to the one to the foot the bill and thus ignored the issue for as long as they could.  Thus, as network upgrades are the driver for half the recent price rises, this is a cost that must be incurred.  However, why are we doubling the pain with wholly controversial Carbon Taxes (or as the government prefers to call it, “a Carbon Pricing Mechanism”).  The global economy is still reeling from the GFC and electricity costs are already rocketing up due to the necessary network upgrades.  Isn’t this bad timing for an extra tax?  The resulting loss of global, economic competitiveness unsustainable?  Australia snuck  through the GFC largely untouched mostly due to our booming minerals sector.  All good things come to an end though; China’s fantastic growth will almost inevitably slow down.  That’s when the writing will be on the wall and the underlying strength of the entire economy will truly be tested.  Since, cheap energy is a foundation of civilisation, pricing it exhorbitantly high would somewhat foolhardy?

How much more will the average household pay in energy bills?

What is the component breakdown of our electricity bill?

This is an interesting topic and one frequently neglected in the “cost of energy” debate.  A common misconception is that the cost of our end-user energy is due mainly to the cost of running the power stations.  Therefore, so what, if out network or Green scheme costs are going up?  They’re just marginal, aren’t they?  Well, maybe perhaps slightly surprisingly, they’re not.  Our energy bill is made up of various cost components, actual generation being just the start.  We retail consumers pay about $200/MWh for our electricity, but it only costs $50/MWh to generate (pre-Carbon Tax).  So, why the disparity?  Well, getting the power from the power station to the end-consumer, us, takes a fair bit of ingenious and costly engineering and plant.  So, on top of the “Energy” charge there is the aforementioned “Network” charge, which covers the transmission of electricity along the “poles and wires” from power plant to our door.  The rest of the cost is a surprisingly small margin given to the “Retail” companies (predominantly Energy Australia, AGL and Origin) that sell us the energy over the phone, and finally into the ever expanding “Green” charge: 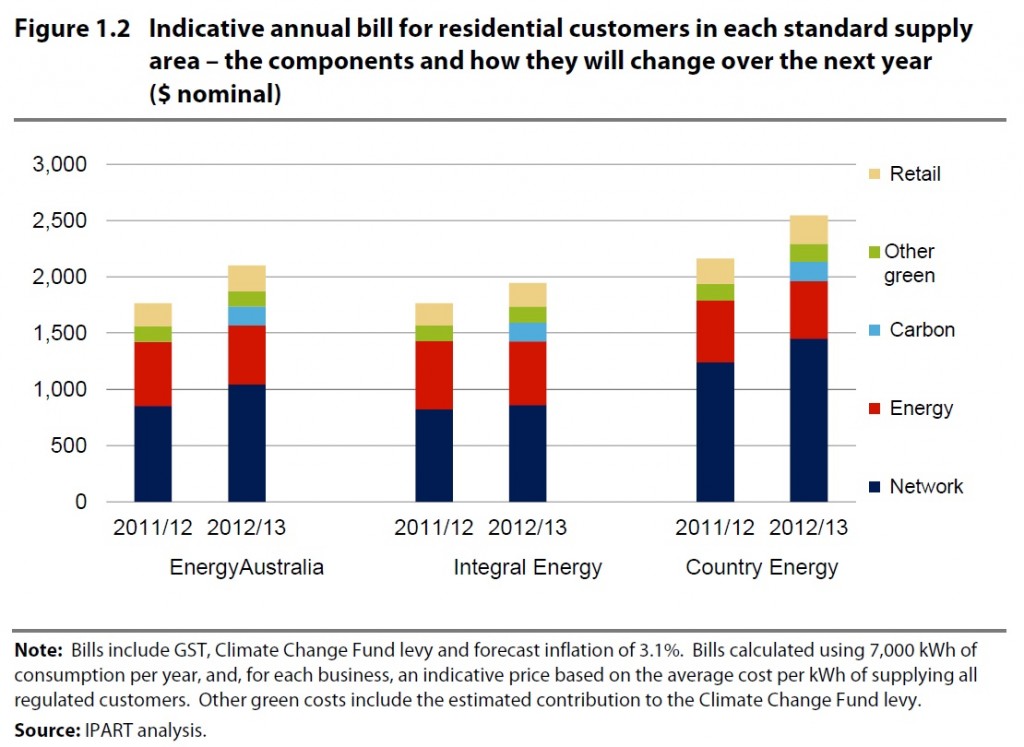 A few dollars more on just one of my bills, is that really significant?

The median household spending on electricity across all income categories is around 4% of disposable income (as shown below).  This doesn’t sound much perhaps?  However, this figure, in itself, is deceiving.  I say “deceiving” as the truth is quite blatantly glossed over and never spoken of by Carbon Tax proponents.  The increased electricity price flows through every business in Australia and results in higher costs to all consumers for all products, not just electricity.  For instance, we our paying 30 cents more (ie 10%) for a coffee downstairs in the last week.  That 30 cents is not just inflation (which is 1.6% here) or a “mere” electricity bill increase.  It is the complete cost incurred in producing the coffee then be passed on to us.  We home owners are not just paying roughly $250 more a year on our utility bill, but increases are seen in all utility bills and all products we consume.  The Carbon Tax is, by purposeful design, a blanket tax across the board.  Energy is the basis of pretty much all consumer production and thus all production is being taxed.  The well-known, but largely unpublicised, fact that it will make a negligible difference to Global Warming is another issue altogether (here, here, here).  Why are we paying this extra chunk of tax on our already very expensive tax base?  Australia, a land of plenty, is already the 5th most expensive country in the world according to the Cost of Living Index.  When I came here in 2000 to see the Olympics, and subsequently never left, I was wowed by the low cost of living compared to my previous abode, London.  Now, my visiting British friends are horrified by all the prices here; be it groceries, restaurant meals, rent or white goods.  Their anecdotal story agrees with the cold hard numbers.  We are paying more for everything now and the goods and services we receive in return is not visibly better than a decade ago.  So, what improved services are we actually paying for again?  True, there may be a non-transparent reason to this all?  Perhaps.  But is there any reason why the government should feel the need to tack on another Carbon Tax to an already burdensome tax and financial situation? 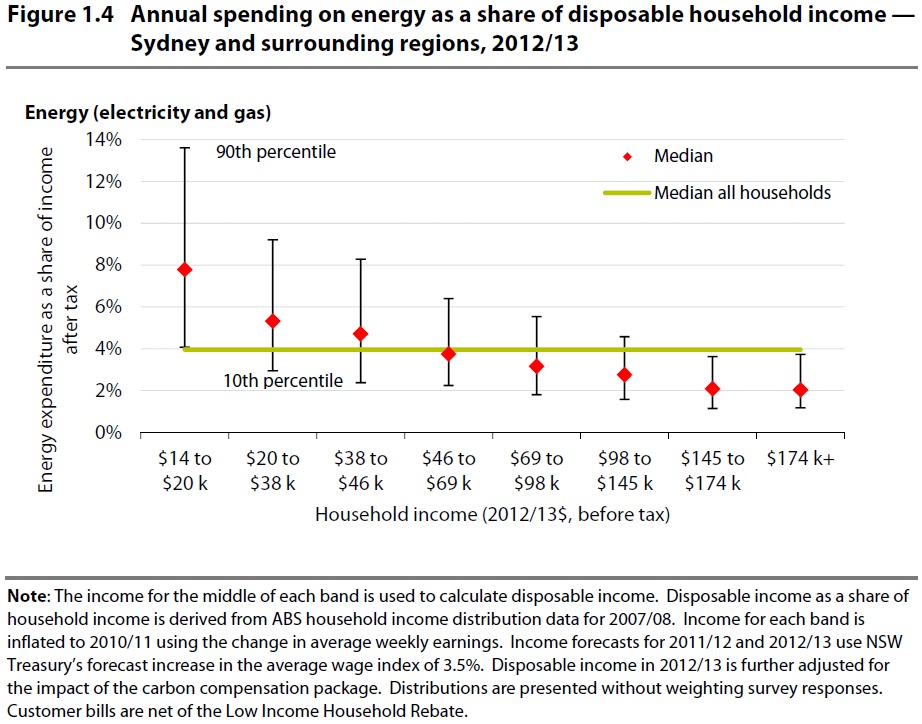 Australia is not the cheap electricity haven we once perceived ourselves to be.  Super cheap, Victorian, brown coal and cheap, NSW, black coal generation no longer minimise the end-user price.  Prices have jumped from the lowest in the OECD to the 3rd highest.  This is partly due to necessary upgrades to the poles and wires network.  However, this unusual mainatenance cost is being compounded, in this GFC-riddled world, with a highly expensive and spurious Carbon Tax.  Together they will push the price up by 16% again this year.  Furthermore, this is currently the calm before the storm.  The tip of the iceberg.  The Carbon Tax is transparently designed to escalate to much higher levels over the next few years.

Electricity, and in particular cheap, abundant electricity, is the foundation of modern civilisation.  It is the rock upon which all prosperity has flourished since its discovery in the Industrial Revolution.  Why pay more for it than is strictly necessary?  Why should we significantly hike the cost of such a valuable resource to satisfy very a subjective Global Warming hypothesis?  To top it off, the Carbon Taxes will not actually make any noticeable difference to preventing Global Warming (even if it is man-made or even detrimental). These are other stories the politicians are happily glossing over all around the Western world.  When will we tell the Emperor the devastating truth, “Sir, you have no clothes?”

““But he has nothing on at all,” said a little child at last. “Good heavens! listen to the voice of an innocent child,” said the father, and one whispered to the other what the child had said. “But he has nothing on at all,” cried at last the whole people. That made a deep impression upon the emperor, for it seemed to him that they were right; but he thought to himself, “Now I must bear up to the end.” And the chamberlains walked with still greater dignity, as if they carried the train which did not exist.”  – Hans Christian Andersen (1837)

3 Responses to Australia’s cheap energy is a thing of the past, why are we now insisting we must top the pricing, leader board?