A world-first, biological, carbon capture plant is potentially on the horizon to clean up coal power station effluent.  This technology, if successful, could be a game changer for energy production: “clean” coal power coupled with renewable petrol production.  How close are we to fulfilling that dream?

Bayswater power station will see some of its carbon dioxide emissions captured on site and fed into sealed tanks packed with algae.

The algae – essentially a form of vegetable oil – will then be harvested and processed at a nearby facility into fuel for sale.

President Obama claims algal bio-sequestration could potentially be one of the most productive ways to address our fuel needs as the price of gas continues to rise.

Jerry Ellis claims algal bio-sequestration is uneconomic, but could be useful in treating agricultural, domestic and industrial waste water.  It is still an unproven technology; a work-in-progress. 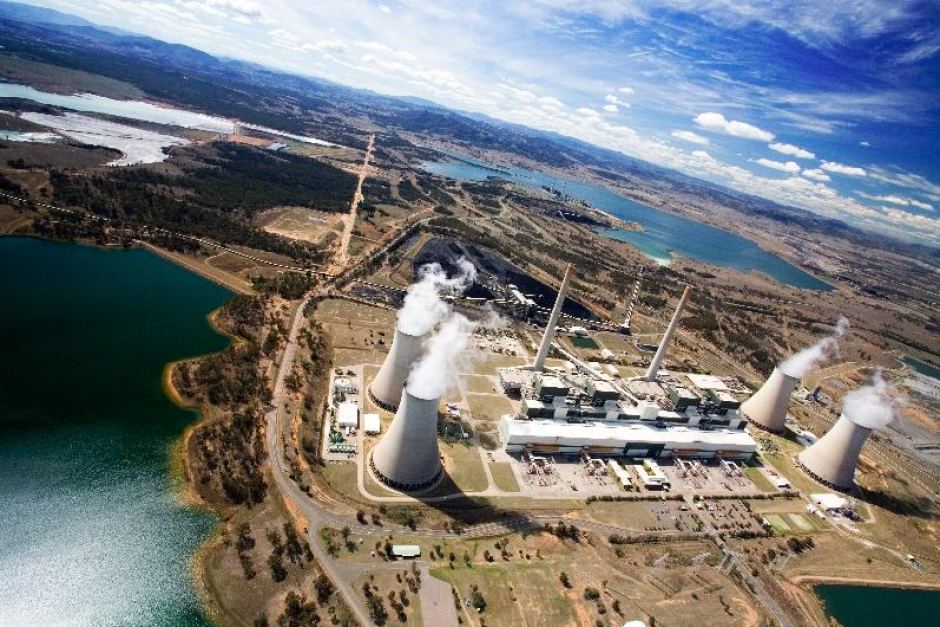 On Jul 2nd ‘13, it was announced that the development of an algal, biofuel farm at Macquarie Generation power station had been agreed by all concerned parties.  The plan has earned the backing of the federal and state governments, and Macquarie Generation, the NSW state-owned power generator that operates Bayswater.  The news of this AUD$140 million development has created some significant hype about the prospects of this burgeoning technology.  Should we be taking more than just an onlooker’s interest in this “sustainable”, biofuel source and waste management technology?

The deal involves Macquarie Generation providing land for the biofuels plant, an endless supply of water, CO2 and electricity, and the possibility of carbon abatement credits…  Algae.Tec will on-sell the processed fuel.

The first phase of the project between Algae.Tec and Mac Gen will be a 400-module facility, which is a large scale up from Algae.Tec’s one-module, proof-of-concept facility in Nowra.   The current, project cost for Phase 1 is estimated at A$140 million and construction is slated to begin next year.  Each module is a bioreactor tank, about the size of shipping containers, which are designed to grow non-GMO algae on an industrial scale for biofuel production to replace fossil fuels.  A major goal of the algal farming industry is to successfully achieve algal bioremediation of industrial emissions, for environmental gain and the sustainable production of valuable products.  Bioremediation is the use of micro-organisms, in this case, algae, to metabolise and thus neutralise pollutants.  Of particular interest to Algae.Tec and Mac Gen are the removal of pollutants from the effluent water and the reduction of gas, flue emissions, specifically CO2 sequestration.

The project is particularly valuable to Mac Gen as it reduces their Carbon Tax liability and cleans up their ash dam, effluent water.  But, it is also valuable to their partner, Algae.Tec, as the resulting algal oil, a form of vegetable oil, will be converted to biodiesel and hydrogenated to grade A jet fuel at a new biofuels production facility, while waste, vegetable, biomass matter will be converted into pellets for cattle feed. 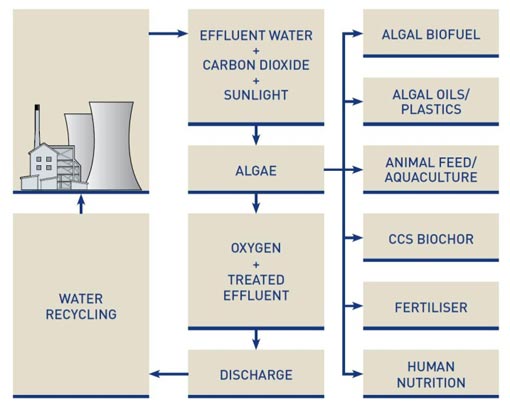 The heart of the algal, bioremediative process is the most important biochemical process in nature, photosynthesis.  Photosynthesis produces sugar: nature’s primary source of energy.  It converts the sun’s power in the form of light into a physical state that can be used as a source of energy for growth and repair.  It just happens it requires carbon dioxide (CO2) and water, and has oxygen as a by-product.  The Algae.Tec, algal, photosynthetic process is specifically interested in the CO2 requirement as this is a means of fixing carbon and thus preventing its emission as a gas into the atmosphere and thus minimises anthropogenic, CO2-based, Global Warming.  The Sugar is also useful to Algae.Tec as it can be harvested for economic gain to help fund the project.  In algae, as opposed to land-based crops, this simple sugar is often converted and stored as complex, high energy, lipid oils.  After tricky, algae “harvesting” (separation from water) these lipids can then be converted to Biodiesel + Jet Fuel + Ethanol (at a very reasonable, but controversial, $44/barrel according to Algae.Tec) and the left-over biomass can be used as animal feed.  The latter conversion involves “extraction” (extracting oil and other components from the algal biomass) and “refining” the ultimate products from those precursors (such as the transesterification of oils to produce biodiesel).

Algae.Tec will supply the algae production modules at an expected cost for the initial 400 of $140m.  The company expects to recoup costs within 3-4 years.  The plan thereafter is to increase the size of the facility to 2000 modules, with a goal of reaching 20,000 modules by 2020.  For initial funding, the company is currently anticipating a US bond issue and does not expect to require further equity raising at this stage.  Assisting the funding requirement is a 45 cents in the dollar tax rebate from the federal government on profits from biofuel production. The then NSW Energy Minister, Chris Hartcher, announced the deal, and the company is also hopeful of additional state government funding support.  Newspaper sources claim that Algae.Tec still needs to raise some funds to get the project underway.  The details of who’s actually paying what is not completely clear.

Algae.Tec has engaged energy services specialist Worley Parsons as contractor for construction of the facility.  Funding is expected to be secured within six to nine months at which point the requisite pre-feasibility study will be completed and permits secured.  Construction is expected to be completed by the June quarter 2014 with first biofuel production anticipated by end-2014.

Algae.Tec started in 2007 and is listed on the Australian stock exchange.

Its shares have fallen from 30¢ at the start of the year to 17¢ last week, before rebounding to more than 22¢ this week.

Algae.Tec listed in 2011 on a 20cps offer price and peaked at over 60c in early 2012 on positive news flow. As is the fate of many innovative start-ups, early price jumps provided attractive exit levels for seed investors and initial newsflow gave way to quiet periods as new deals, such as Bayswater, underwent negotiations, leading to waning investor interest. The shares have since drifted back to 20c (a week after the Bayswater announcement) and by Feb’14 they have slipped to 15c. 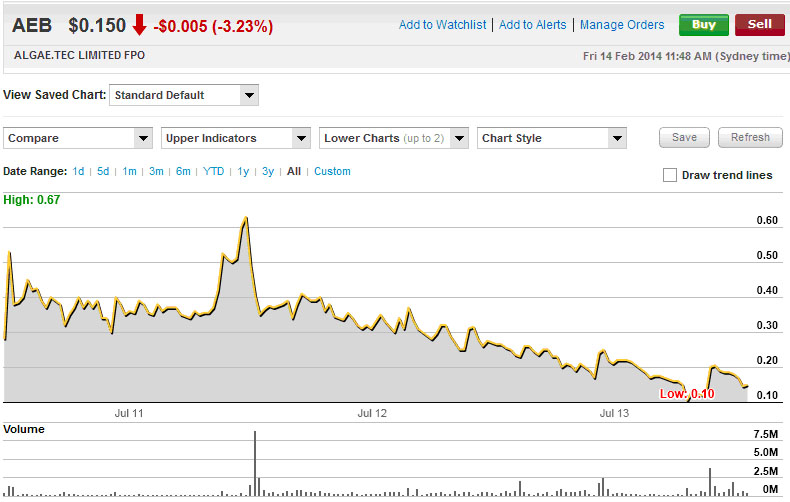 Algal bioremediation is not a new concept and many other companies are also trying to push the lab concept into a viable, industrial-scaled development:

The pros and cons of algae as a biofuel

Algae.Tec Ltd, founded in 2007, is an Australian, advanced, renewable oil from algae, company that has developed a high-yield enclosed algae growth and harvesting system, the “McConchie-Stroud” System.  The Company has offices in Atlanta, Georgia and Perth, Western Australia. The Algae.Tec bioreactor, an enclosed modular engineered technology, is designed to grow non-GMO algae on an industrial scale, and produce biofuels that replace predominantly imported fossil fuels. The Algae.Tec solution is less than one tenth the land footprint of pond growth options, while its enclosed module system is designed to deliver the highest yield of algae per hectare, and solves the problem of food-producing land being turned over for biofuel production.

They currently have a one-module, test facility in Nowra, NSW and proposed facilities in Holcim, Sri Lanka and possibly in China, Germany and USA.

There are therefore many different photo-bioreactor designs in the literature. The strengths and weaknesses of each design:

The Lowdown of the state-of-play in a couple of min. from the horses mouths:

How the Technology Works – algae to biofuels