Australia joins the fight against Global Warming and gets a Carbon Tax – is it worth it though?

So, after much rhetoric and, sadly, very little, informed debate, Australia has a Carbon Tax.  We have stepped up and joined the European Union’s, pioneering, tax-raising, err planet saving, party.  What does this really mean for us, the taxpayers?

On Sunday 10th July, the Australian Federal Government announced its long awaited Carbon Pricing/Tax scheme (summary here, details here).  This is a bid to financially squeeze out coal-powered energy generation and other industries which create “evil” Carbon Dioxide (CO2) gas.  This scheme has been thoroughly opposed, funnily enough, by the “opposition” party (the right-wing Liberals).   But supported,  by the left-wing, Labour government and the very, left-wing Greens.  Even though the current, Labour, prime minister, Julia Gillard, made a clear and well-documented, campaign promise of “Say No to Carbon Tax”, she has since rescinded on this promise and successfully instigated for a Carbon Tax:

Julia Gillard, and her Treasurer, Wayne Swan’s, pre-election promise to say ‘NO’ to Carbon Tax – August 2010

To be fair, she had no real choice in making this highly significant policy about face.  She was forced into a Faustian pact with the Greens and some Independents to gain office in the Federal election last year.  These minority parties’ are the balance of power and, as such, their exaggerated power and influence, considering how few votes that back them, swung this massive, policy decision into action.  Labour is a minority government and its coalition is hanging in on only a shoe string of votes.  As 60% of Australians actually currently say “No” to a Carbon Tax even those tentative votes are now at great risk.  Thus, one would expect Labour would be intrinsically reticent to go ahead with this unpopular policy.  However, irrespective of the potential voter wrath, Labour has gone ahead regardless.  They have decided to save their present coalition and appease the Greens, but the repercussion is that the larger voting picture is being made increasingly precarious.

So, ignoring the risks, and with the agreement of key Independents and the Greens, it appears that the Government has successfully pushed for a Carbon Tax.  It has the numbers to legislate the scheme regardless of virtually unanimous, Liberal opposition.  The scheme is expected to be up and running by 1st July 2012.  This will then mean that the 500 largest companies in Australia will be required to pay approximately “$23/Tonne of CO2 equivalent of carbon (CO2e)”, aka $23/Tonne for any CO2 emissions over a 3 year period.   According to the government, this equates to a total revenue increase of $24.5 billion.  Be mindful that they will, of course, err on the conservative side to allay voters’ fears.  After these 3 years, there will follow a more complex, escalating “emissions trading arrangement”.  The real tax shock, which of course is being glossed over at the moment, occurs after this 3 year, honeymoon period.  There is a legislated target to reduce Australia’s emissions by 80% below 2000 levels by 2050.  This is not just a bold target but, under current technology constraints, nigh on impossible.  Thus, the low, initial $23/Tonne can only be a transition amount to soften the inevitable, far greater, tax blow to come to make CO2 emissions reductions a reality.  This will be a highly significant burden to us tax payers, who, of course, are at the rough end of any price on carbon.  All costs are passed through by business to us householders.  An exorbitant $80/Tonne is a minimum requirement to hit coal power production where it hurts.  Undoubtably, that cost will result in a serious lifestyle hit.

Why the magic $80/Tonne figure?  Well let’s take a peak at the real story about the relative cost of energy: 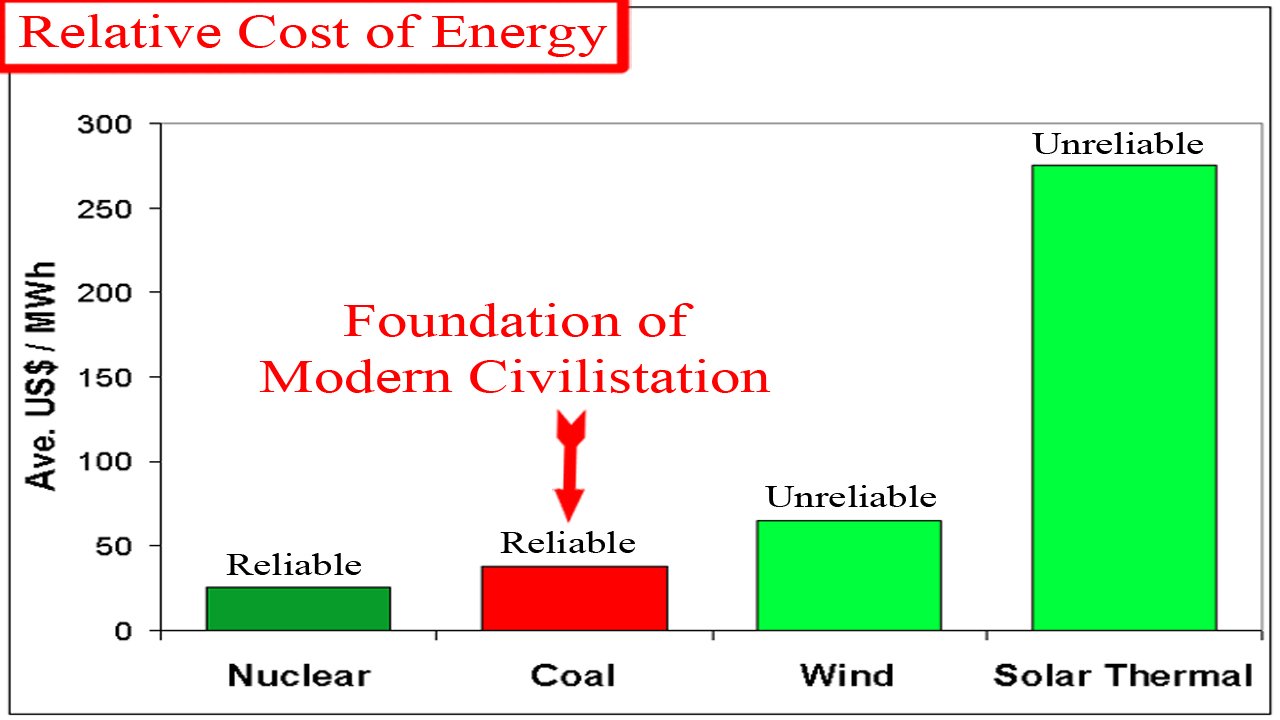 This is based on the full, end-to-end cost of the technology (Long-Run Marginal Cost)

As you can see from this chart I compiled from my own experience in the energy industry and corroborated by using 3rd data from the International Energy Agency, there are no alternative, cheap technologies to replace coal (except unpopular nuclear).  Nuclear is unacceptable to the Greens and is thus off the table as a viable alternative to coal.

Coal constitutes the bulk of electricity generation in the Australian, energy market.  In addition, and fortunately for us, coal is extremely cheap.  It costs roughly $40/MWh to make.  Wind is the major, renewable, alternative that the Carbon Tax is ultimately promoting.  However, the very best Wind Turbines can only creep down to only $120/MWh.  Whilst Solar Thermal is way out of the running at $250/MWh.  Taking it one step further, solar panels on houses (at $650/MWh) is simply buying votes; grand ideology masking economic reality.  Another important consideration in this calculation, which is regularly ignored, is the reliability of the power production.  Renewables such as Wind and Solar Thermal are weather dependent, coal is not.  It’s true, they can be used in moderation, they can be a part of the energy mix, but they can never be relied upon to supply the grid any significant amount of its essential, baseload energy.  In addition, ironically enough, they actually need backing from “dirty” gas power stations to stabilise their contribution to grid.  This backing generation capability pushes the cost of Renewables over and above my conservative initial estimates.  Thus, putting $120/MWh on the price of Wind is very generous.  It is really significantly higher .  How often is this economic reality of the lack of viable alternatives to coal included in the green debate?  Being “green” is feel good and, in principle, desirable for many (including myself, as it happens), but, in the real world, ideology must surely marry with practicality?  I personally don’t prescribe to catastrophic, Global Warming derived from man-made, greenhouse gases, predominantly CO2 (my movie here).  However, even if I did, I would balk at the unrealistic assumption that Wind and Solar are viable alternatives.  However, for arguments sake, let’s assume there is Global Warming and “green”, Renewables is the essential way forward.  How much will emissions reduction cost?  As it happens, the average coal fired generator produces around 1 tonne of CO2 per MWh, thus $1/MWh conveniently translates into $1/Tonne of CO2 equivalent carbon.  Thus, we need the “exorbitant” $80/Tonne (or $80/MWh) price to provide the financial incentive to replace coal powered, electricity production with “green” alternatives.  That’s the gap between coal and wind production ($120/MWh for Wind – $40/MWh for Coal).  That gap has to be filled and thus must be subsidised by the Carbon Tax to make coal economically replaceable.  Therefore, we should be mindful that the headlining $23/Tonne of is just the beginning.

$23/Tonne hits the headlines, they really mean an inevitable $80/Tonne, and that’s still likely to be conservative.

Unfortunately, these significant increases in electricity prices will not be pleasant for the ultimate, electricity consumers; mums and dads, and everyday businesses.  It’s also interesting to note that these increases come on top of the already, rising, electricity prices resulting from increased expenditure on networks and renewable investments such as wind and solar.  These network upgrades are sadly necessary and thus unavoidable.  They have already pushed up our bills by 30% in the last couple of years.  The government plans a range of compensation measures in an attempt to reduce the impacts of Carbon Pricing.  However, these are largely cloak and mirror tactics. If you give with one hand and hand it back with the other, then there is a no net result; no actual, CO2 reduction.  The Carbon Tax is a Carbon Pollution Reducing Scheme.  That’s its aim.  Thus, the government can’t give the money back.  The compensation will be greatest for low-income earners, so most of the tax will hit the middle classes, but everyone will be affected.  All taxpayers will pay, and pay hard.  The compensation can’t be too large, it has to hurt you to make CO2 reduction schemes attractive.  The government’s rhetoric promises a fantastic emissions reduction of 80% below 2000 levels by 2050.  This figure is phenomenally highly and to achieve it any compensation must be relatively low to make that target even remotely achievable.

So, $23/Tonne carbon tax is insufficient by itself to induce a material switch in generation away from coal into cleaner alternatives.   Thus, this levy will not materially reduce CO2 emissions by one bit.  So, what’s the point of $23/Tonne?  The revenue it generates will go into the government’s coffers and they claim, in part, will subsidise “green” programs.  But, even if all of the Carbon Tax did really go “green” programs, and let’s face it, that’s unlikely, this is somewhat irrelevant.  We already subsidise “green” programs generously and the point of the Carbon Tax is to reduce emissions, which, if that’s not happening, then the scheme is failing to achieve its goals.  During boom times this sort of fiscal inefficiency could be supported, but whilst the global economy is on the precipice of a collapse (U.S. Debt has reached $14.58 trillion – en par with WW2 levels), can we afford this sort of leftfield flight of fancy?  If we need to tighten the belt, what should give first – hospital spending or esoteric, unproven Global Warming mitigation?

So, a $23/Tonne Carbon Tax is totally ineffective at reducing emissions.  Whilst, the futuristic $80/Tonne, Carbon Tax may be slightly effective in reducing Australian emissions.  But, the U.S., China and India have no inclination in establishing Carbon Taxes, so our Australian, $80/Tonne, Carbon Tax goes back to totally ineffective at reducing emissions on a global scale.  What we’re left with is a large cost, low benefit scenario.  The Precautionary Principle of “better safe than sorry” just doesn’t add up here.

Finally, let’s go back to square one here.  We’re embarking on a journey of government taxation that is greater than the cost of WW2 for a cause than is not only unproven, but highly unlikely, and we humans can’t even feed ourselves.  With limitless resources, or at least in boom times, sure, we can build more inefficient wind farms.  However, we’re not currently in that position.  Money is finite and we need to pool our resources in essentials; safe-guarding jobs, staffing schools and providing cheap energy to businesses and homes.  Green idealism is great, but can we afford it when the associated costs are considered and reality bites?

Hmmm, why are we doing this again…? 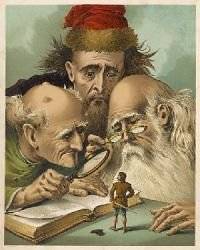 “The scientists on Laputa spend their time extracting sunlight from cucumbers and other nonsense.”
Jonathan Swift’s fantastic and subversive book (Gulliver’s Travels 1726) remains supremely relevant in our own age of distortion, hypocrisy, and irony.