The relative cost of energy production is a golden nugget of information that should permeate any debate on energy planning.  Should we decommission, “dirty” coal power stations and replace them with only slightly less “dirty”, gas-fired stations?  Why not go the whole hog and replace coal with clean, green alternatives: wind farms, rooftop solar panels, geothermal or biomass?

Cheap energy is the basic building block of modern civilisation.  We rely heavily upon it for our continued industrial and technological success.  With that said, can we change our energy mix to a greener one, but still affording that new flatscreen next year?  How much does being Green cost?

The relative cost of energy production

Why are these sources so variable?  Well, the financial modeling employed is relatively complex and the assumptions they leverage off are both extensive and somewhat subjective.  The cost of plant development has some highly sensitive inputs that can often make or break a particular project’s viability.  These variables include the overnight capital cost (the cost of the initial plant construction and grid/fuel connection), the discount rate (the rate at which investors will happily loan you money), fuel cost, the capacity factor (how frequently the plant runs) and maintenance costs.  So, each of my data sources have made their own assumptions in these regards.  They thus are valid in their own rights and, conversely, have their own limitations; for instance ACIL Tasman assumes a 9.5% discount rate, but AGL energy uses a 12% discount rate.  This variable, in particular, can make a huge difference with highly expensive projects, such as nuclear.  Nuclear has a huge start-up cost, but a tiny running cost.  Thus, if a plant takes 5 years to construct or ends up being delayed to 10 years (which is pretty common) that could change a LRMC cost $40/MWh project into perhaps a $120/MWh.  There is a large sovereign risk with nuclear power projects as political sentiment can change rapidly and dramatically.  Money markets recognise this and will often charge large interest rates to cover the risk they undertake in funding such projects.  Therefore, considering this, a nuclear plant in pro-nuclear France or Japan may cost far less than one in currently, anti-nuclear Britain purely on financing costs.

The other contentious technology with respect to costing is Geothermal because this is still an unproven technology in Australia.  So, whilst AGL includes the technological development costs, ACIL Tasman hasn’t.  This can easily account for the difference between a cheap $85/MWh and an expensive $180/MWh.  Apart from these 2 noticeable exceptions (nuclear and geothermal), all 4 data sources are relatively consistent in their evaluations.

These sources may only provide indicative costings as each individual plant development has to be valued on its own merits.  However, I believe it is useful to find some common ground between these 4 energy pricing models.  So, here’s a reasonable summary of the studies: 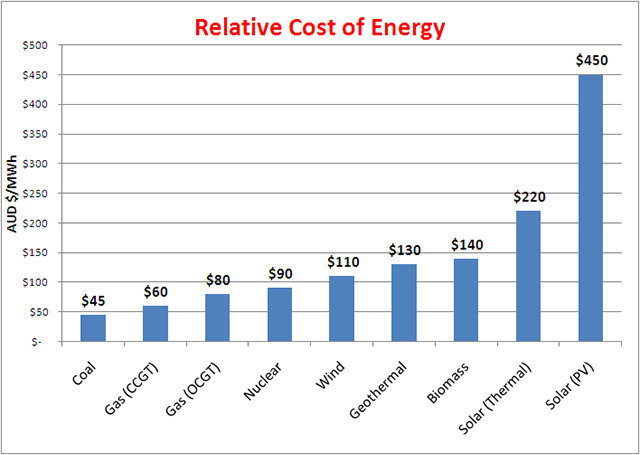 Australia is on the cusp of signing up for a European style Carbon Tax.  The government advert I just saw on T.V. literally a few minutes ago said, “It is not a tax on individuals, it’s a charge paid only by Australia’s biggest polluters“.  Phew, that’s fortunate, for a second there, I thought we tax-payers would be coughing up the bill.  It’s actually just the coal power stations that sustain us that will have to…

As you can see from these relative costings, all the Renewables technologies are, sadly, uncompetitive without substantial, tax-payer subsidies.  In the majority of countries globally, coal power provides us with the bulk of our electricity.  This is with good reason.  It is a cheap, simple and reliable technology.  As you can see from all these studies, there are currently no competitive alternatives to replace coal as our major, baseload, energy source.

A note on technology Terminology:
This entry was posted in Cost of Energy and tagged $/MWh, Biomass, Coal, Cost of Energy, Gas, Geothermal, Nuclear, Solar, Wind. Bookmark the permalink.