A poignant hallmark of our modern, civilised society is the relative fairness of wealth distribution.  Some would argue it’s still not fair enough, but the important and huge philosophical step to inclusiveness was the invention of the Welfare State by the British in 1946.  I laud this jump in social equality that guaranteed state funded Education, Housing and Medicine for all.  However, when do these basic human rights, that prop up society, turn into an instrument of its downfall?

As we speak, the U.S. presidential campaign is coming to a head.  The full broadsides of slur are being fired from the political party ships.  The latest, and perhaps the greatest salvo to date, occurred yesterday.  The Republican, Mitt Romney, has been shown to have blundered out the statement: “47% of Americans are welfare dependents”.  Not politically correct at all for one running to be the People’s representative.  This comment, among a few other candid ones were made at a private, fund-raiser event secretly filmed by ex-Democrat president, Jimmy Carter’s grandson, James.

What is the real issue at stake here?

On the face of it, Mitt Romney perhaps comes out looking crass, unprofessional and scathing to those he wishes to woo.  The obvious desired effect of the release of this old, 4 months old to be precise, video at this late campaign juncture is to trip up Mitt Romney at the final furlong.  On the other hand, could it actually backfire on the Democrats?  They have actually pointed the spotlight on the central issue facing America and, furthermore, the whole of the Western world: economic recession and potential depression.  This is an issue the Obama administration would rather not admit to.   As they have quite purposefully raised the debt levels to the highest and most unsustainable in U.S. history.  The pertinent argument that encapsulates Mitt Romney’s embarrassing “outburst” is:

The story of civilisation is repeated ad infinitum.  It is a cyclical process that has repeated itself all over the planet through all the ages of man: innovation and dynamism leads to a rise of power, a period of vitality and prosperity then passes, however laziness creeps in and leads to unsustainable handouts by the unproductive state.  If you haven’t already done so, you check out the Tytler cycle, which explains it much more eloquently.  Think of all the major empires throughout history and, if you question why they collapsed, it pretty much unanimously comes down to unwieldy, bankrupt, bureaucratic governments being out-competed by newer, more dynamic, foreign, competition.

I write this article as this question is actually old news that should occasionally be re-stated.  The Tytler Cycle and the knowledge that a top heavy welfare state can be dangerous is just no more than oft forgotten common sense.  To illustrate the point, I will show you the comments by my illiterate, English great grandmother born in 1871, Mary Ann Card.  When the “Welfare Lady” came a knocking one day offering handouts to her, she, quite insightfully, proclaimed:

(an excerpt from my aunty Pat’s biography of my great grandmother, Mary Ann Card)

My gran was a great English savage of Irish descent. But noble she most certainly was too! No-one knows exactly when she was born because she changed her age to suit her mood. She was very, very old when feeling in need of sympathy, but very young (always 69 as I recall) when wanting a job as a cook. My best estimate is that she must have been about 84 when she died in 1955.

My gran never recognized any laws, rules, customs or modes. Every decision was based on a cat-like sensitivity to the best words, behaviour, or pronouncements that would suit her purposes at the time. She was a devoutly faithful Catholic in words if not actions, and she even offered to become a Protestant in order to get into a Church Army home in Bow.

Mary Ann was the only girl born of an Irish mother (who fled from the famine) and an English father. She had six hefty brothers. She went into service at the age of eleven.

In my gran I recognized a true realist with whom I could identify. She was as much a lone traveller as I was. I had lost my mother when I was four years old and once a year at least, I got pushed in and out of various obscure parts of the family. Both of us seemed to be ‘victims’ but in truth neither of us ever was and we both learned well enough how to capitalize on our assets when the occasion presented itself.

The finest performance that my gran ever gave in my presence was during the visit of a fervently compassionate Welfare Lady. After some preliminaries she inquired about Gran’s ‘winter woollies’. Gran denied that she needed any and said, ‘I’ve got used to the cold now. So long as you keeps moving and gets on with the job you gets warm right enough in the end.’ The job, she went on to say, was ‘doing me offices at five in the morning’. She had indeed ‘done’ offices, but never at five in the morning, and at that particular time, she had a comfortable housekeeper’s daily job with an indulgent aristocrat, who let her ‘cook the books’ with impunity and never queried the price of grouse.

After much reticence and pride my gran finally opened a drawer and displayed some much-holed underwear. ‘My dear, you can’t wear that!’ said the Welfare Lady in horror. ‘That won’t keep your old bones warm, will it now?’ The upshot of it all was that my gran was promised some ‘really nice warm woolen underwear before the onset of the cold weather’. But as the door closed behind this nice woman my gran muttered, ‘That lot’ll be the ruin of us all!’

That remark puzzled me off and on until I was at least 35. Suddenly during the early 1960s I came to see what my gran was getting at. I grew alarmed myself about the ‘dependent society’ with such wasteful throw- away habits and interminable tales of woe. Now of course my gran’s remark appears to me to have been something of a prophecy. The underwear eventually turned up at my father’s house where my gran said to my stepmother, ‘I don’t believe in molly-coddling myself, but Billy (her son) must be cold driving buses; the combs’ll keep him warm.’

My gran and I didn’t always see eye-to-eye. At 16 I was a starry-eyed Communist and she did battle with me in right royal fashion. ‘You can say what you like, with all those big words you use,’ she said. ‘That doesn’t make you right in the end. They know what they’re doing because they’ve been bred to it. They know just what those foreigners are thinking about behind all the blah-blah.’

Churchill was her hero and the only person who knew what was what as far as she was concerned. ‘Of course Hitler’s up to mischief,’ she would say. ‘What else would he want all those tanks for?’ And, ‘You and your Russians. Who wants to be ordered about anyway’? You’d be the last one, my girl, I can tell you.’ How well she understood me.

The fact that the democracies of the West have, almost to a tea, all turned from balanced, safety net style, Social Welfare states to collapsing, top heavy, handout states is sad.  However, it is a strangely natural and normal phenomenon.  Handouts are gratefully welcomed, handouts secure votes and handouts create dependency among those voters.  Those who offer overly generous handouts thus help secure their political position.  However, society as a whole suffers, production inevitably drops as less people are working and thus paying the taxes required for these handouts; civilisation inevitably declines.  Great-Gran, Mary Ann must be turning in her grave watching our current Global Financial Crisis predicament.  However, knowing her mischievous sense of humour, she might have some smug glee that her prediction is on the verge of coming true.  Will we stop the government spending now, right now, while we have a chance, or will we continue piling on the Social Welfare debt… “That lot’ll be the ruin of us all!” ?

Mitt Romney – an example of a man who will prevent the financial debt cycle?

I was sent this poem by a colleague today and, though regretfully not as romantic as first hoped, I thought it an appropriate addition to this discussion.  It’s a poem from 1949 that is perhaps an interesting, contemporary opinion on the evolving Social Welfare State in post-war U.S.  I don’t agree that socialism “simply soaks the filthy rich And helps the common man.”  It actually soaks the Middle and working classes, the super rich have Private Investment Companies, that the rest of us taxpayers can’t access, to hide their income.  However, the overall sentiment of the dangers of living and relying on a handout-based society of entitlements is clearly expressed. 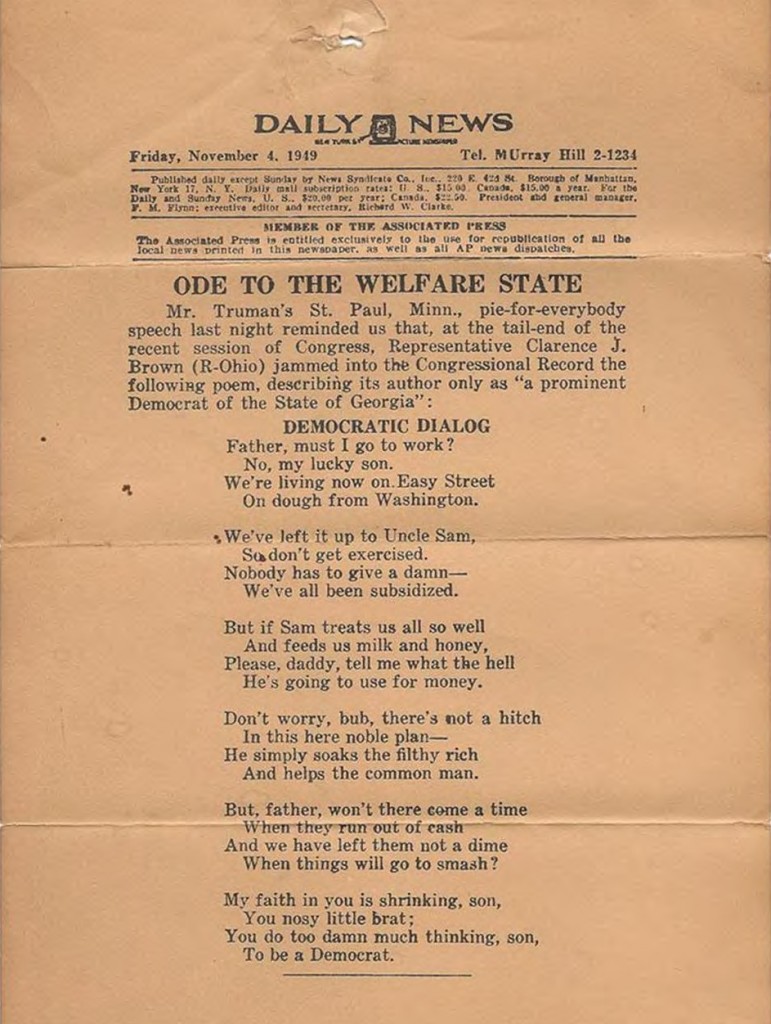