Obamacare – health care the Swedes would be proud of?

The U.S. health system gets a lot of flack around the world.  Micheal Moore, specifically in his doco SiCKO, would presumably like to take much of the credit as Chief Critic.  He revealed the truth about the only remaining super-power’s ignominious medical “fail”.  He emphatically told us he had to seek out the sanctuary of the devil, Fidel’s, Cuba, to get decent health care for the 9/11 rescue workers under his wing.  He quite convincingly told us of the rot that has set in to the American Dream: high cost, low quality medicine.  As for the poor, these poor guys don’t even get a look in…  We’ve all heard the spin, but is this really true?

To illustrate the point, please take the time to read this paper by Prof. Brad Wright, which a doctor friend of mine directed me to recently.  We were chewing the fat and discussing the relative merits of the U.S., health care, system over a drink a few nights back.  In the cold heart of the following day, he flicked us this paper to add some facts and figures to the rhetoric.  So, have a read.  Michael Moore would most certainly endorse the paper; private sector in the U.S. equals bad, public sector in Sweden equals good.  But, the question is, should we head this version of the “truth” or take it with a pinch of salt?

Admittedly, I was already a little wary when Brad Wright’s intro begins with statistics such as “Americans have the highest rates of child mortality… and shortest life expectancy”.  This is a sort of validation of the paper’s prime premise, a “failed”, U.S. system.  Those stats, however, have very little to do with the medical system, as the really poor in America mostly get reasonable health care, via Medicaid.  These “shocking” stats are a probably a result of socioeconomic and lifestyle problems, rather than lack of access to primary medical care.  “In 2008, Medicaid provided health coverage and services to approximately 49 million low-income children, pregnant women, elderly people, and disabled people”.  That is if these stats are even very informative in the first place.  Paul Krugman of the socialist leaning, New York Times echos Brad Wright’s sentiment: “And surely the fact that the United States is the only major advanced nation without some form of universal health care is at least part of the reason life expectancy is much lower in America than in Canada or Western Europe.”

That is a sweeping statement, and as a guy who works with stats every day, I approach with caution.  It is true 95% of stats are made up, or more accurately, highly dependent on subjective, simplifying assumptions employed to create a manageable dataset.  Why, according to the U.S. National Cancer Institute, do US cancer survival rates dwarf, yes dwarf, those of other western nations?  Even black males in the US, who one would suppose to be the prime losers in the U.S. health care system, have higher cancer survival rates than the average in most western nations: 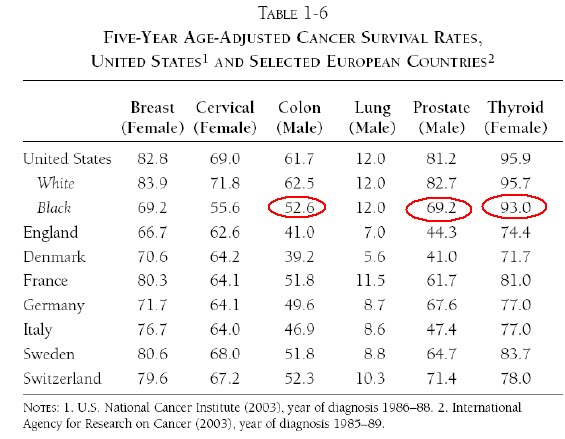 Another big statistic, that is perhaps more subjective than objective due to selective assumption making, that Brad Wright cites is: “45 million Americans were uninsured due to numerous barriers”

This article by FactCheck.org does not, in general, defend the “45 million” as a socially acceptable phenomenon, but still, even it qualities this seemingly large figure:

“In short, it’s true that many of the 45.7 million “uninsured” could find coverage through existing government programs or pay for their own coverage if they chose. Some, perhaps 6 million, are illegal immigrants who would not receive coverage under any proposal now being considered.”

So, perhaps, the highly controversial and commonly cited, 45 million “Gap” was a slight misrepresentation and exaggeration of the real numbers at risk?

The U.S. system is not perfect and that’s why luckily there are actually 50 different, State level systems out there.  Whilst, some need overhauling (as seen by Romney Care in Massachusetts), some are the finest models in the world.  Obamacare is a socialist model, which will be run by 15, non-elected, Obama cronies (the Independent Payment Advisory Board) from Washington.  This central planning model sounds alright in theory perhaps, but, in practice, if history is anything to go by, it doesn’t work.  Obamacare is predominantly unpopular (in the U.S. at least).  This is demonstrated by the fact that Obama’s own election campaign team has carefully avoided mentioning it where possible.  This is Obama’s single, largest piece of legislation in his 4 years of tenure.  His Pièce de résistance. However, all we can see of it in his re-election campaign adverts is tumble weed blowing in the wind.  Obamacare is incomprehensible, no one knows what it represents; except, a general Nationalisation of the system.  In an Obamacare world, you don’t need to pay insurance premiums.  All patients with pre-existing conditions must be accepted by a health fund at any time.  Thus, everyone will stop paying premiums, wait for the heart attack, sign up for a month during the transplant then leave again.  Why pay more than you have to? –err, this is not a sustainable system.  That’s not really how the concept of insurance works.

There are problems with the U.S. system, for sure, and it does indeed need reform.  It is expensive, Americans pay 15% of GDP whilst Swedes pay 9%.  Not really bang for buck perhaps?  The reforms need to centre on the oft-cited “45 million” people, who fall through the safety net of the system.  However, the “huge” 15% cost is not actually due to any fault of the doctors, but by their compatriots, the lawyers (like Obama himself).  These Law Firm lobby groups (eg American Association for Justice), that are mostly Democrat sponsors, have helped block reform since Jimmy Carter.  They have actively encouraged the highly convoluted, legal framework around medicine and the resulting super-payoff, malpractice suits that occur when breached.  It’s purely self-serving, jobs for the boys.  Simplify the laws, constrain malpractice payouts and then the doctors won’t have to over-treat the patients with inane tests to cover their potential liabilities all the time.  That is the real reform that is needed.  Does Obamacare do this? – sadly, no, even the pro-Obama, Left-leaning CNN has noted that Obamacare is fully endorsed by associations such as the American Association for Justice and does no such thing as curtail the legal excesses.  Shame that.  It’s an opportunity missed.

The association [American Association for Justice] is also a large contributor to President Barack Obama’s re-election campaign. It is opposed to malpractice tort reform, for obvious reasons, and I suspect that it may have played a significant role in the absence of malpractice liability reform in the Affordable Care Act [Obamacare]. by Dr. Anthony Youn, for CNN.

A recent survey of 1,214 orthopedic surgeons found that 30% of the tests they ordered didn’t help patients, and were mainly aimed at reducing exposure to liability suits. by Kevin Pho, for CNN.

As for our blond and beautiful Nordic friends, the Swedes, they are a hard-working, small, wealthy per capita, homogenous society that has a “great” health care system.  But, even Brad Wright’s article suggests their social welfare model would not necessarily work in the meritocracy that is America.  In addition, Brad Wright (and The Economist) mention that even Sweden has some noteworthy problems and has to tinker with its system on occasion, “Unintended consequences [of Universal Coverage] in Sweden include increased waiting times, overuse and abuse of the relatively generous system, and inequality between county councils.”  So, not the perfect utopia we usually here about.

The U.S. health care system is not a system, but 50 different, experimental variations on a theme.  The diversity in their approaches is a plus for America over many other wealthy countries.  Individual States can create and manage their own system and if their version “fails”, then you have 49 other variations to choose from.  Unlike popular myth suggests, the U.S. has an excellent, first-in-class health care service.  However, it perhaps also has the bottom-of-class service for some of its citizens.   In addition, it is very costly as a whole.  Thus, agreed, the U.S. system needs tweaking.  Primarily, the explosion of malpractice suits over the past few decades needs containing and constraining.  This will rein in the common and expensive practice of “over-treating” patients just to tick boxes.  The U.S. health care system needs some modernisation and improvement, but nationalised, Federally run Obamacare is unlikely the answer.  Importantly, Obamacare does not attack one fundamental malaise of the current system, the excessive litigation.  However, it does increase bureaucratic overheads and with its naive, centralised, implementation of a “free health care for all” philosophy, cripples the (private) insurance funding mechanism.  Don’t whack the nail in with a sledge-hammer, use a hammer instead?

1 Response to Obamacare – health care the Swedes would be proud of?